COVID-19: A FOCUS ON DEATHS

Scepticism.  It is absolutely right to question what we are being told.  Professionally I have to be sceptical all the time, whether that is evaluating business software or, back in the day, auditing stock takes.

Scientifically I will always remember a school textbook saying that in the early days of microscopes, 'scientists' believed they could see a tiny man in sperm, just as Aristotle had suggested.  That became the wisdom of the day, but we now know that is incorrect.

So it is no surprise that people question what they are being told, and have indeed been challenging me and what I have been saying.  So let's get to some of the facts.

Death is one of 6 distinct risks of COVID-19, so let's look at that now.  Did the lockdown actually increase deaths?   What age groups were affected?

We looked at deaths up to week 36, 4 September, recently.  But let's expand on that analysis, using the same weekly data set from the Office for National Statistics.

"Excess deaths" is the number of deaths over (or indeed often under) the average for the last 5 years.  In 2020 this is:

For 2020, the ONS has also disclosed the number of deaths where COVID-19 has been mentioned on the death certificate:
Comparing the two on a cumulative basis: 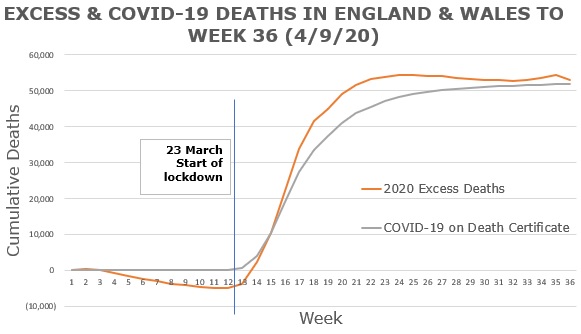 What this graph shows is:

Professor Whitty disclosed in the press briefing this morning, 21 September, that influenza kills around 7,000 a year, with some 20,000 in a bad year such as three years ago.

Deaths from COVID-19 of 53,000 in only some of the year represents a far bigger problem.  That is due, at least in part, to the lack of a vaccine as is used for influenza.

The comparative data for 2015-2019 is only available in a small number of age ranges.  Calculating the excess deaths for 2020 on that basis gives this graph: 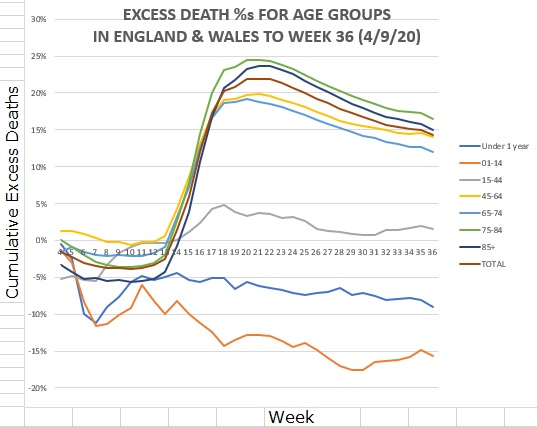 We hear that the death problem from COVID-19 is mainly for the over 50s.  But this shows that the problem with excess deaths is for the over 44s, with lower deaths than expected for the under 15s.

That leaves the rather wide 30-year age range 15-44 having excess deaths peaking at 5% of normal.  But what if we were to look at smaller age ranges?  The relevant data is not available publicly, but we can look from a different angle with the data that is available.

Whilst we can't look at excess deaths, we can look at the absolute number.  If we assume the number of people in each age band is broadly similar, then the different levels indicate how much COVID-19 affects each age group: 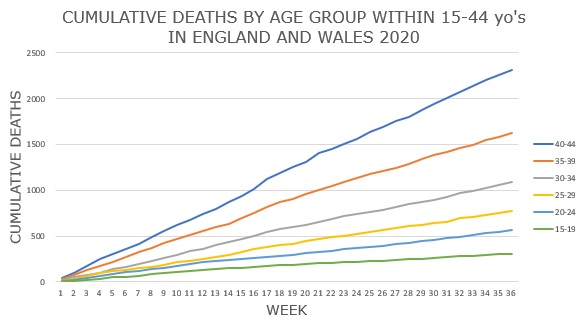 In broad terms this shows that you are more likely to die as you get older.  But is there any evidence for increased deaths from COVID-19?

Let's look more closely at the middle section between weeks 10 and 20.  Week 20 was the peak of excess deaths for older year groups in the graph above.  An increase in the slope would indicate the death rate had increased.  We can only see a very slight increase in the slope for the 35-39 and 40-44 age groups: 
There's been around 53,000 deaths from COVID-19 in the first 8 months of the year, whether it's based on excess deaths or death certificates.  That is so much worse than 'flu, which is at worst 20,000 in a bad year.

This is mainly because of the lack of a vaccine against the virus behind the COVID-19 disease.  There won't be a vaccine proven safe and effective, and available in significant quantities, until 2021.  In the meantime there have been some improvements in treatments, but a resurgence of COVID-19 infections in 2020 will result in many more deaths.

Looking at age ranges:
That doesn't let the under 35s off the hook though:

CovidCourier
An Oxbridge science grad. A biotech manager. A qualified finance professional. An IT pro. A technical author. A musician. .
Click here for the CovidCourier blog objectives and author's biography