Death is the main risk of COVID-19 that the media reports.  That's traditionally what sells newspapers and fills air time.  We now know that deaths mainly affect the elderly and those with pre-existing medical conditions, not so much adults under 50 or schoolchildren.

So whilst each death is a terrible tragedy, COVID-19 is increasingly becoming a story of the survivors, with four examples shown above.  The story is about the adverse affects of COVID-19 on their lives and livelihoods.

HOW RELEVANT ARE HOSPITALISATIONS?

The two other main metrics which the Government has disclosed are new infections and hospitalisations.

However that is not appropriate because:

THE MAIN RISKS OF COVID-19

There are six main risks from COVID-19:

Take away the risk of death, and that still leaves five risks of events that can occur before hospitalisation.  Let's look at these in more depth, espcially when observed in younger people.

If you have had COVID-19 without any of these five symptoms you are very lucky.


THE RISKS TO YOUNGER ADULTS

Data of the incidence of these five risks by age is not readily available to the public. But it is clear that those five risks can apply to all ages, including younger adults.

Devi Sridhar, an advisor to the Scottish government and a member of the Independent SAGE group warns at 30min30 that this virus is “too dangerous to spread through the population, not only because of the mortality [dying] but because of the morbidity [LongCOVID] it causes in young adults…that’s going to be the story about COVID, not about the deaths”.  Chilling stuff.

When I was a young adult myself, I would reckon on two days in bed with a flu-type illness each year.  With COVID-19 it is typically much longer.  ZOE reports "Most people recover from COVID-19 within two weeks, one in ten people may still have symptoms after three weeks." 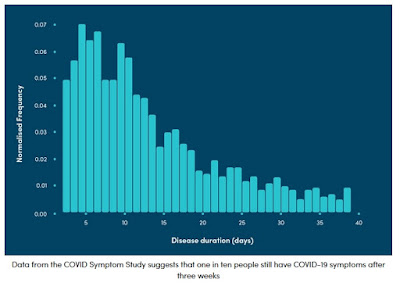 The symptoms themselves are not restricted to fever, a dry cough, snuffles and losing taste and smell.   People report the most horrible symptoms.  Here's the story of a 61-year old male.


He reports "Once you realize you have a virus that could kill you and there’s nothing anybody can do about it, you live in constant fear.... You start coughing into a wet pillow and you can’t stop and your breath becomes ragged and your bed is soaking and you wonder, is now the time? Do you try to drive yourself to the hospital? Do you call an ambulance? ... so you simmer alone in the darkness doing nothing, paralyzed by fear and chasing your breath and praying that 102.1 does not become 103.1."

There have since been some improvements in treatments in hospital, but they are by no means guaranteed to save your life.

His story would be the same for a younger person, but there's more stories below.

Two days ill in bed is one thing.  Two weeks off work is another.  Whether someone is employed, self-employed or on a zero hours contract.  That's income lost, and potentially a job or contract lost.  If it's caring for children or an elderly person, that makes such activity impossible.

Furthermore, other members of the person's household need to self-isolate for an extended period, and may contract the disease.

So just the initial illness can be very difficult.  That alone is enough to be worth taking precautions not to catch the disease,  But there's four more risks to come. 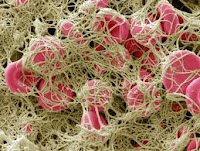 When SARS-COV-2, the virus behind COVID-19 gets into the bloodstream, such as as when it has burst cells in the lungs, it causes micro-clotting.

The consequences are set out in this article titled "Coronavirus linked to stroke in otherwise healthy young people"  These people would have gone to hosital as stroke patients, and not been counted as due to COVID-19.

Here is advice from the Stroke Association in the UK. 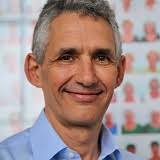 That's without going to hospital.  It is also common for people to have a second more serious stage of illness, such as happened to PM Johnson, which takes them into hospital.

Clearly any extended illness is frustrating, worrying, and could lead to loss of earnings or job.

That leads us on to LongCOVID.  Any serious viral or bacterial infection can drain the body's energy from the fight.  COVID-19 is no exception.  If anything it is worse.

People of all ages are complaining that they are having difficulty living a normal life months after the infection.

Here's the story of a previously fit 36-year-old Pilates instructor from Scotland, has been unwell with suspected Covid-19 for fifteen weeks.

Around 5% of people who have had COVID-19 are experiencing symptoms for months.  There is a specific support group, with many other Facebook groups.

Imagine the impact on your life and livelihood.   As one person who contacted me by tweet said, "Statutory Sick Pay won't even pay my rent". 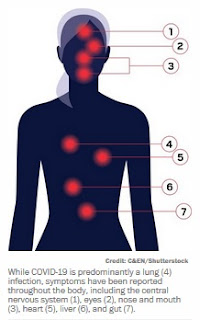 The combined effect is that damage can occur in heart, liver, kidneys, digestive system, lungs and brain.  This can happen to people who have otherwide had mild symptoms and who have not had to go to hospital.

Let's look at these organs in that order.  Though in many cases damage is not restricted to a single organ. 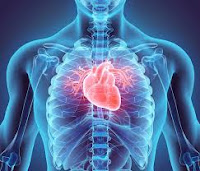 Here's the story of a 29-year old lady with significant symptoms including heart problems.

The British Heart Foundation have said:

This study reports "up to one-third of Covid-19 patients have sustained organ damage, with 30% of patients scanned, using advanced magnetic resonance imaging (MRI), found to have measurable damage to their liver, heart or kidneys."


"Nearly half of those hospitalized with the virus have blood or protein in their urine, showing early damage to their kidneys", according to Alan Kliger, a nephrologist at the Yale School of Medicine.

It is common for people who have COVID-19 symptoms to also have problems with their digestive system.  Sometimes only such problems, without the classic respiratory symptoms.

In this study, half of those reaching hospital had digestive symptoms, and of those the symptoms were: 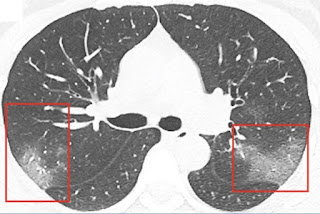 COVID-19 first attacks the lungs, and can cause a variety of problems.  The most severe includes holes in the lungs.

Initially the lungs and airways swell and become inflamed. This can start in one part of the lung and spread.

Some people have pneumonia, a lung infection in which the alveoli are inflamed.

On a chest CT, doctors may see “ground-glass opacity” because it looks like the frosted glass on a shower door. 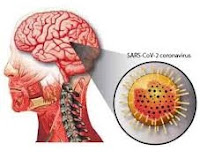 Here is an article titled "Warning of serious brain disorders in people with mild coronavirus symptoms".

It says "40 UK Covid-19 patients whose complications ranged from brain inflammation and delirium to nerve damage and stroke."


This was followed with this study "Fears of brain damage 'epidemic' as rise in inflammation is linked to coronavirus."

Indeed "Of all frightening ways that the SARS-COV-2 virus affects the
body, one of the more insidious is the effect of COVID-19 on the brain"

"The disruptive and destructive actions of neuroimmune cells and inflammatory signaling can permanently impair memory. This can occur through permanent damage to the neuronal connections or neurons themselves and also via more subtle changes in how neurons function."

Whilst every death is a tragedy, the story of COVID-19 is becoming the serious detrimental affects on survivors.  Affecting their lives and their livelihoods:
The more people catch COVID-19, the more people will suffer from these issues.  That's before hospitalisation, and without including the risk of death.

That's why it is so important to monitor the level of new infections, and keep them under control.  Indeed it is best to keep infections to #NearZero
at 9/11/2020 05:30:00 pm
Email ThisBlogThis!Share to TwitterShare to FacebookShare to Pinterest

CovidCourier
An Oxbridge science grad. A biotech manager. A qualified finance professional. An IT pro. A technical author. A musician. .
Click here for the CovidCourier blog objectives and author's biography